We are all in the gutter, but some of us are looking at the stars.

Cue widespread Manchester United anger. Predictable, over the top denial from reds that there was ANY sort of link between the Cantona incident and what happened in Walsall.

My twopenneth? There was an obvious and tangible link between the two. You could almost touch it that day.

But still, personally, I wouldn’t blame Cantona. Certainly not with the ferocity Palace fans do. By that logic, you could blame Richard Shaw for kicking Cantona (several times) in the first place. But I do believe there was a link. And I do believe wearing Cantona masks to Selhurst Park is unnecessarily insensitive.

Now Ed doesn’t look old enough, or even ‘football’ enough for me to care about his opinion on something that happened nearly 20 years ago but I’ll make an exception this time. Despite the fact I was hanging off a floodlight pylon supporting United at Selhurst Park while he was likely being spoon-fed.

Some background. Sorry, not buying into the fact it was always happy families between United and Palace prior to 1995. Ron Noades, 1990 cup final ticket allocation and United’s only ever ‘friendship’ with Charlton Athletic are the obvious context. But no, there wasn’t a hatred. Not of the sort we’d eventually witness across two matches in Birmingham.

I was at all four of those United v Palace matches that season and have the following observations. I arrived just in time for kick off at the league match having watched my old school play a match in Wolverhampton late in the afternoon. Despite the Cantona incident, I recall little or no aggro either before or after the game. I sneaked onto the Red Issue/UWS coach back to Manchester. The mood wasn’t necessarily anger towards Palace (nobody had a clue who Simmons was or what he had done). There was just a general feeling that Eric had let himself down at that stage. “He’s fucked now” being one comment. 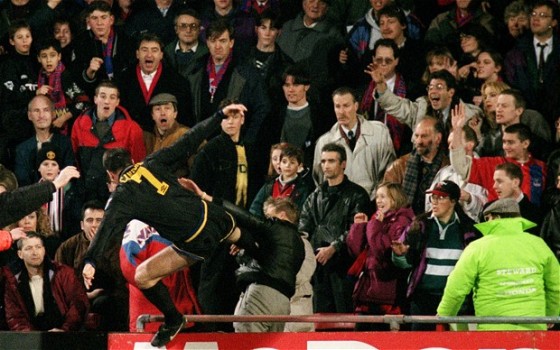 A couple of months later and the semi-final was a completely different proposition. Attitudes had clearly changed, shaped by the media, our unswerving loyalty towards Cantona and of course siege mentality.

This is a version of the day’s events I very quickly found on a Palace forum:-

“Sure but when Man U fans turn up in Cantona masks they are thinking cheeky chappy, no one really got hurt. For those of us who were at Villa Park we think of the fervent atmosphere of retribution amongst Man U fans that led to a father’s death. When we left in the coaches from Selhurst it was all smiles and families. We turned up at Villa Park and there were hordes of angry Mancs looking to slap anyone in red and blue.”

Yeah. That’s pretty much how I remember it.

To argue that the incident up the road in Walsall was an isolated outbreak of violence likely demonstrates you weren’t in the vicinity of Villa Park in the run-up to kick-off.

More background. There’d been little or no semblance of a United firm that season. We, the younger Mancs (mostly 16-19 years old) were on the train most weeks away and at grounds like Filbert St., where the Baby Squad came marching round 70-80 handed at kick off, there was nothing to back up the handful of kids from Wythenshawe and North Manchester there at the turnstiles. At Everton, when the doors of the Adephi went in, it was mostly the Cockneys who led everyone out the side door to a then empty street.

Of course, this would all change significantly at West Ham on the last day of the season, but in 1994/95 I don’t recall an active United mob doing much. Until Villa Park.

The Palace semi brought out some proper old faces. In particular, I recall there being lots of older Cockney Reds, literally on the rampage, especially before the match.

I vividly remember one of our lot from Blackley, coming up to me inside Villa Park.

“Fucking hell DP, it was brilliant out there, like the old days. United are rioting up and down the streets like the 70’s.”. This same lad was the only one going out the front door at the Adelphi with a table above his head, so he was a good judge of trouble.

I looked around me inside the ground and regrettably, I have to admit, at that age, I felt a sense of pride in a support like that. It was ferocious in looks, volume and attitude. A true Red Army with platoons from Salford, North Manchester and South London. Untouchable. Of course, I had no reason to believe how tragically that would end.

I’m sure other reds will have had different experiences that day. But I’ve read a few comments online from older Palace fans present and they concur with mine. The atmosphere was nasty and quite honestly the majority of the United support I encountered, revelled in it.

I don’t know what happened up in Walsall. I recall it being a bunch of reds from Irlam. Press reports vary wildly. Some said Paul Nixon simply fell under the wheels of a bus. Some say chased. Some say stabbed and bricked. Nobody was charged with anything. That’s the real issue here.

The replay was shambolic in every sense. A virtual no-show from Palace. And certainly no ‘fervent atmosphere of retribution’ second time round though events on the pitch led to raised temperatures in the stands. About 50-60 of us stood in a lower corner of the ground trying to create some sort of atmosphere. A shameful rendition of the best round of the best football competition in the world.

19 years later. From a group of supporters who are quick to chastise the lack of justice over Heysel, it’s a pretty poor show not to respect the wishes of Crystal Palace supporters on this whole matter. After all, they lost one of their own that day and have had zero justice. Quite frankly, their fans were bullied all over Birmingham in April 1995. Why? Because of the actions of ONE of their supporters.

If only for Paul Nixon’s children, if their viewpoint is that Cantona masks offend, can this not be respected? Is not wearing masks too much to ask. It’s not like Cantona hasn’t enjoyed enough adulation down the years. Often at the expense of current players.

No, it’s childish and insulting. Firstly to do so. Cityesque anyway. Secondly to argue about how Palace fans should feel about it. They kind of feel how they fucking feel.

If you’re going to Selhurst Park, I reckon the shirts need your support instead.

RIP Paul Nixon. My heart goes out to his children who lost their dad.